As I have said before, I don’t do a lot of fashion-show-reviewing, but Couture time is my favorite time of the year, and I like to share it, so here we go. I only have a few favorites (or examples, in the case of Alexis Mabille), but to see more head on over to Style.com where al the photos are from anyways.

Versace is Versace, and while exciting, has never really been my style. There are pieces I love, but for the most part, I like my sequins and metallics a little more toned down (is that even possible? I think yes.) It was a Versace show, through and through, and the exorbitant amount of sequins and beading and embellishments that one usually sees at Couture week actually fits in at Versace. It doesn’t look too over the top, because it’s Versace, and isn’t Versace always a little over the top in some way? 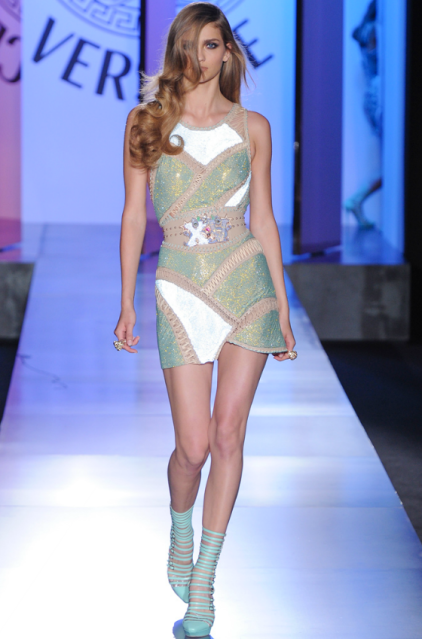 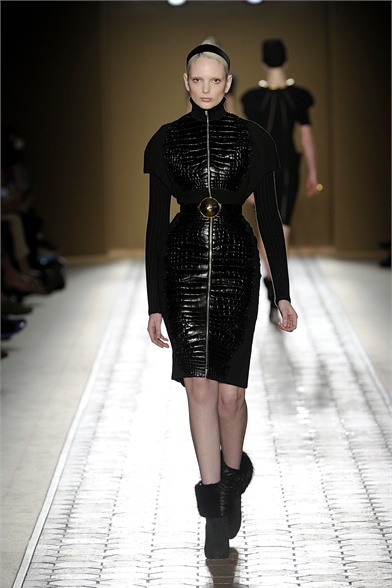 Christophe Josse is getting stronger and stronger. His collection, a small one with a limited color palette, was nonetheless beautiful. Black separates, short and long dresses, with white, gray, and taupe pieces at the end made for a sophisticated and refined collection that was altogether simply lovely.

It breaks my heart to tell you that Alexis Mabille’s show was struggling, to say the least, because I was really pulling for him for a while. After last season’s distracting headpoofs and lack of focus in silhouette and style (but not color, he did use every color in the rainbow, which is a cool scheme) and the seasons before that inconsistency in, again, silhouettes and style, I’m just not so sure about Mabille anymore. Which is sad, but true.
I stubbled to find one piece I liked in his show, many were either too metallic/foil like (I’m not going for a mud wrap, thank you) too kimono-y, too cape-y, too sheer, too lace-and-velvety, too bow-y, had too many weird greek-like-curl-ouf-embellishments (I don’t want to look like one of the muses from Hercules, thank you), or too, did I get everything? I think I got it all. And let’s be clear, greek poufs and kimonos and lace and foil don’t really all go together.
I settles on the navy blue long sleeved sequin gown, because I do love my sequins, when done well. While this is a lot of sequins, it seems less like a sequined dress and more like a glorious, sparkling, midnight like gown. Though I don’t really want the bow. Or the hair.

Are we a present? 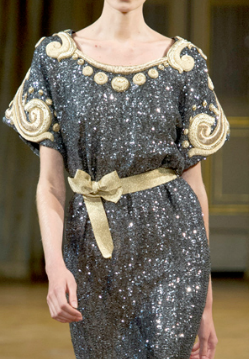 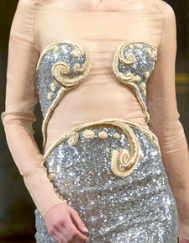 You know, I love couture. I love the glitz, the glm, the sequins and the beads. But I admire when a woman can do a couture show with smart, gorgeous separates, and not a beaded gown in sight. Bouchra Jarrar has done a magnificent job of taking couture and making it wearable, but just as lovely. Jarrar sent out stunning pieces in a limited, neutral color palette, some with more volume, some with a more streamlined silhouette, but all stunning. 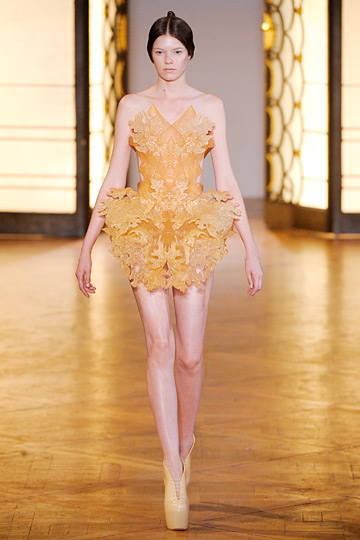 Iris van Herpen’s fall couture was just like her spring couture: metallic, oddly shaped, and alien-esq. But in a sort-of cool way. 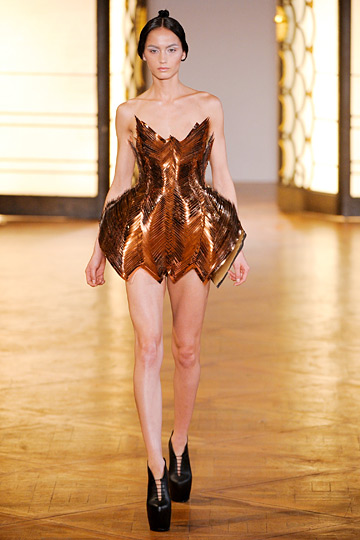 This also could be titled:
“Why is everyone so into flowers and giant headpieces and giant flower headpieces?”
I don’t usually do a lot of fashion-show-reviewing, since there are so many other people that do that, and probably do it better. However! Couture time is my most favorite time of the year, and the clothes are too beautiful (usually) to not review. So I shall. And if you don’t want to read my opinion, then just look at the pretty pictures.

While everyone else has been busy freaking out about Versace for H&M, Donatella has been busy freaking out over her new Atelier Versace show (I use the term freaking out loosely, I’m sure she was not, by any means, freaking out in the same way the public did for what she did at H&M). Atelier Versace is nothing new, Angelina Jolie made sure we knew that at the Golden Globes last week. But there has not been a couture show in Paris since 2004, and for the first one in 8 years, Donatella did a good job. Quintessentially Versace, with the right mix of sportiness and sexiness. Lines were exaggerated with the help of some sort of metal something, which brought a little 80’s back into it. Colors ranged from a subtle light grayish-purple to neon yellows, oranges, and greens, and of course, some gold. Though these dresses are meant more for a red carpet than a runway, and the shoes were a bit chunky, the presentation was still a fabulous return to the Paris Couture Shows.

This, um, piece, though not a red-carpet-worthy dress, is awesome if only because of Lindsey Wixson’s pose. Which almost redeems her falling on her last Versace runway.
Alexis Mabille 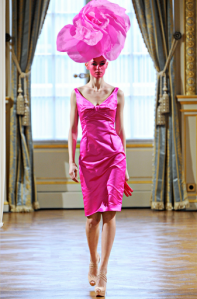 I am a big fan of Alexis Mabille, particularly in his couture collections. But this couture season around, my eyes got so distracted by the ginourmous poufs of a flower on top of the models head, which was painted the same color as the flower, which was the same color as the outfit. I commend him for really going into the whole color thing head on (literally) but I found the headwear to be too distracting and the face paint a little jarring. Once I got over that though, I did like what he did, especially seeing as he used basically no black or white in the show, which is pretty impressive. Looking at all the outfits together, it looks like a big, fashionable rainbow, which is not something we see a lot, especially in couture. My love of the color aside, I wasn’t too fond of all the shiny fabrics, or fond of some of the more matte fabrics either, and some of the dresses I found a little overdone. But the clothing was still beautiful, and those colors still dazzling. 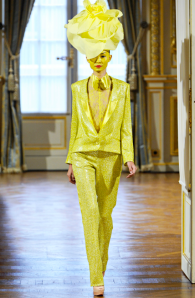 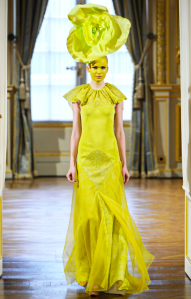 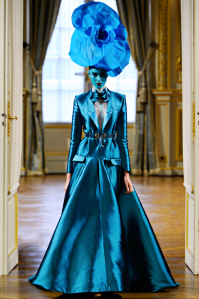 Save for the lace at the bottom, I sort of like this.
Christophe Josse

Christophe Josse has been quietly working in couture since the early 2000’s, first as assistants at various houses, then showing couture under his own name in July 2005. In January 2006 the designer was invited by the Chmabre Syndicale de la Haute Couture (or, the lawmakers of couture) to show during the official Haute Couture shows, but only as an “invited member”. At this time last year, the federation promoted him from guest member to permanent member, which allows his brand to bear the exclusive “haute Couture” label. (Side Note: as I’m sure we all know, being a couturier under french law is extremely difficult, as they have such rigid standards).
His show today was full of black and white and pink and purple and little cocktail dresses and floating, beautifully draped fabrics and stiffer fabrics and some shininess and some draping and some structure and some longer gowns and some sheer panels and green and yellow and ponies and rainbows and unicorns. The clothing, while so beautiful, was a little all over the place. There were gorgeous flowing gowns in all colors, including one purple and white printed number, which didn’t really seem to fit in, though it was one of my favorite pieces. Some dresses were a little stiffer, more structure and tailored. There was one that looked like tinsel. There was a light blue number with pockets and jewels (one of only a few dresses to use gems) and another light blueish number strangely reminiscent of McQueen in terms of technique, silhouette, and decoration. The clothing, again, was beautiful, but the collection was a little to small to showcase such a wide range; the pieces jumped from one to the next instead of flowing smoothly. But I would wear about half of the collection, even if it doesn’t go together all at once. 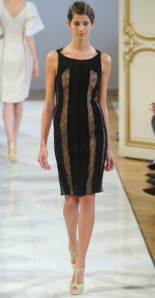 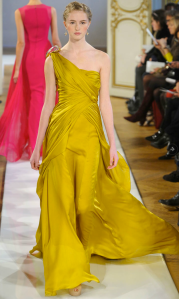 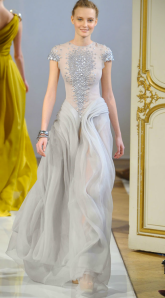 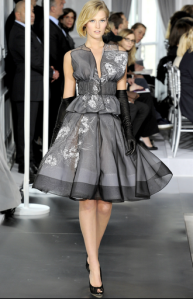 To say Dior’s first post-Galliano show was a little bit of a disaster is putting it mildly, but Bill Gaytten’s success this season almost makes up for it. After Galliano was dismissed with little time left before the couture show, the responsibility fell to Bill Gaytten, who, after working under Galliano for 16 years, would presumably know how to do things. However the result was not a good one, and Dior is pretty hard to mess up. The silhouettes and shapes are so ingrained in the minds of the fashion world that it is nearly impossible to think of Dior without thinking of those silhouettes originally created by Christian Dior himself back in 1947. Perhaps it was this old knowledge that allowed the fashion world to see past the theatrics of the show and still love Dior, giving Gaytten another chance at stepping up to the plate of couture.
And it’s a good thing they did (well, it’s not like there was much of a choice, as no replacement for Galliano has been found thus far). Gaytten brought Dior Couture back to it’s roots with a bang, or in this case, an x-rated bang. The full skirts and fitted tops were back. The crazy prints, extra fabric, and geometric head things were gone, and in their place stood the classic silhouettes and ladylike beauty of the Dior we all know and love, but with a saucy twist. Sheer fabrics gave a glimpse inside the clothes, showing their machinery (and the models machinery as well). Past the sheerness though, were beautiful, classic clothes brought up to date a bit. Gaytten’s collection had the feeling of a designer who has just shown his first show at a new house, when he works more cautiously and takes less risks than he might in the future. A promising ‘start’, he left the fashion world wondering just what’s going to happen next. 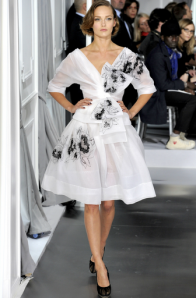 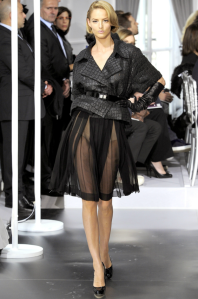 It should be said that this is not real crocodile, but ostrich skin irregularly cut and hand sewn to organdy and tulle.

For the label’s second couture show, I’d say job very well done. Sophisticated, clean, lady-like, polished, and beautiful are all words that come to mind when thinking of this collection. Though mostly black and white, the textures made it seem as though it had more than just a handful of colors. (Though the flowers did bring about all-too-recent memories of his first couture collection, which could be a positive or negative thing…)The mix of said textures was incredible, between the lace and the flowers and the sparkles and the patent leather, there was no shortage of black and white excitement. Not to discredit the ‘simpler’ pieces, in fact, some of the most successful outfits, were only one color, but they still stood out for their shapes and materials. There was a hint of naughtiness (perhaps he and Bill Gaytten conferenced and decided that now was the time to show underpinnings, for if not now, when?) in the sheer materials and black panties, but the effect was chic instead of cheap, a hard thing to achieve with visible underwear. But Valli did it, and did it well. 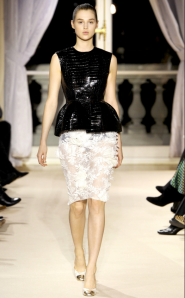 Everyone’s lovin the croc. (Thanks, Marc.) 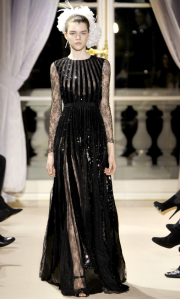 All photos via Style.com