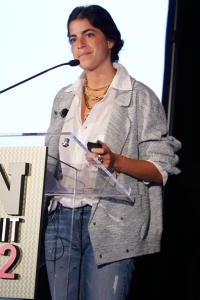 Photo Courtesy of WWD
If you don’t know who Leandra Medine, aka The Man Repeller, is, you must be living under a rock. This girl is a fashion phenom, women adore her, and contrary to the name, so do men, as her upcoming nuptials would imply. The Man Repeller was born only two years ago, and though still in its infancy, is one of the most popular blogs on the planet, garnering an astonishing 2 million views a month. One of Leandra’s good friends, Rachel S., told her, in her response to Leandra’s question of why, out of the three guys she was dating, not one would commit (Wait. Dating three guys at once? How’s that man-repelling?) Rachel simply said, “Leandra, you’re a man repeller”. And thus, the blog was born.

Photo Courtesy MR
She received press very quickly due to her unique approach and point of view, but Leandra didn’t realize she was sitting on a real business until she was ranked the number 1, out of 25, top voice in fashion by Ad Magazine. So she got serious, set up a calendar, and started treating her blog “like a real editorial publication.” She has since collaborated with such brands like Dannijo (they are all best friends though), Del Toro, Rebecca Minkoff (another friend), Saks, Barneys, and has contributed to numerous magazines. Pretty impressive for someone who is just one year out of college.

Photo Courtesy MR
She credits social media for letting her market herself and build up her brand, to the point where people wanted, and still want, a part of it – she has a book coming out in September and wants to create a lifestyle brand to “celebrate women and female intellect, because that’s really what the blog is about.” She gets to learn about her readers, and how most sales she receives commission on happen between 1-5am, because of it. She also credits social media for getting her her engagement-party shoes, a pair of orange, lace up Alaia’s from 2008. She posted about it, a reader found them in a Barney’s Outlet in Honolulu, and they just happened to have her size. Seriously? It’s like she lives in a fairytale. Oh, she also got the shoes, originally $1500, or $176. “And that, is the power of social media”.
But what about her wedding shoes? “I’m wearing a pair of Superga sneakers….what, you all asked!”

Photo Courtesy of WWD
Leah Robert, Senior VP of Liscensing and Marketing for the Camuto group, which represents such brands as Vince Camuto and Jessica Simpson, also talked about social media advertising during the FN Summit. The Camuto Group did one of their most recent campaigns through facebook, with a college program that featured ten colleges throughout the country, including UCLA, BU, and George Washington. Each college has a brand ambassador and two fashionistas to represent Vince Camuto. The brand wanted to reach the 20-29 age group, and this college campaign seemed perfect. The girls not only did charity projects like a closet cleanse, which raised almost 5,000 pairs of shoes across all ten campuses to donate, they also had trunk shows, contests like inviting girls to show off their closets and win a whole new wardrobe, and events like campus hunts, in which various Vince Camuto items were hidden around each campus, and hints given on the respective campuses facebook pages. One of their most successful activities was Interview Style 101, in which they taught girls how to dress for an interview or first job, and then had an accompanying contest that lasted 14 days and had an end total of 525,000 votes. Because of this campaign there is not only more brand awareness, but also a 3.5% increase in facebook likes.

Photo via WWD
Rebecca and Uri Minkoff are a fashion power couple, but not in the traditional way. The brother-sister duo seems to have it down. Rebecca Minkoff, which launched in 2005 as a lifestyle brand with a focus on accessories, has not only grown rapidly, but is also expanding rapidly. Clothing was introduced in 2011, Shoe sales are up 100% this year, and they have a successful marketing strategy using an unusual platform: Instagram. Well, unusual in terms of marketing. Brands normally run ads in magazines, make commercials, or have billboards with the models faces splashed across Times Square. But with the rise of Social Media, brands are finding all kinds of new ways to reach their customer. And the Minkoffs’ pride themselves in being “pioneers of the digital space” according to Uri, so it makes sense that they are the first brand to leverage Instagram in such a new way.

Rebecca’s Shoe of the Day– via Rebecca Minkoff Twitter
The Minkoff’s Instagram ‘campaign’ started with Rebecca simply posting her shoe of the day or her outfits, and people responded, and copied. She often gets several hundred likes and comments within the first hour of the photo. This is not only a way to reach the consumer in an unstressful social media environment, but it is also a great way to get feedback about their designs. Customers can comment on what they like and don’t like and the Minkoffs’ take all that into consideration, because after all, the more engagement with the customer, the better. 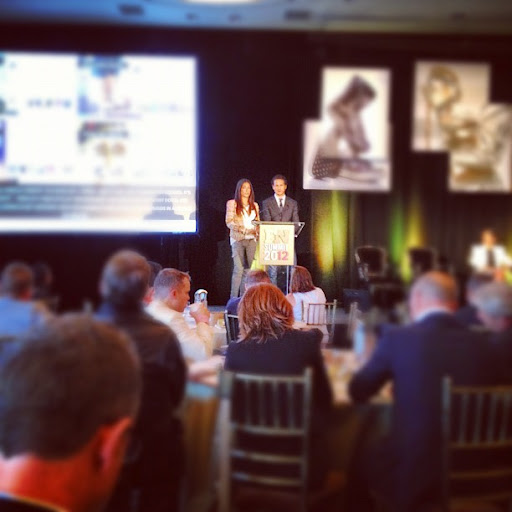 Photo via Rebeca Minkoff Twitter
Of course, this advertising leads to a lot of traffic on their site or partner sites, because an instagrammer will often ask where the product is from, who it is by, etc. The Minkoffs once posted a picture of one of their bracelets that wasn’t selling very well, and the sales instantly went up. Though the Minkoffs have found that solely sales work hasn’t worked, people like to have a human connection, and they like seeing a personal side of Rebecca. The Designer, Mother, and Entrepreneur enjoys showing her followers everyday life, because there is “something nice about seeing something you might do shown by your favorite designer,” she says, “even if it is just a normal thing, people relate to it.”